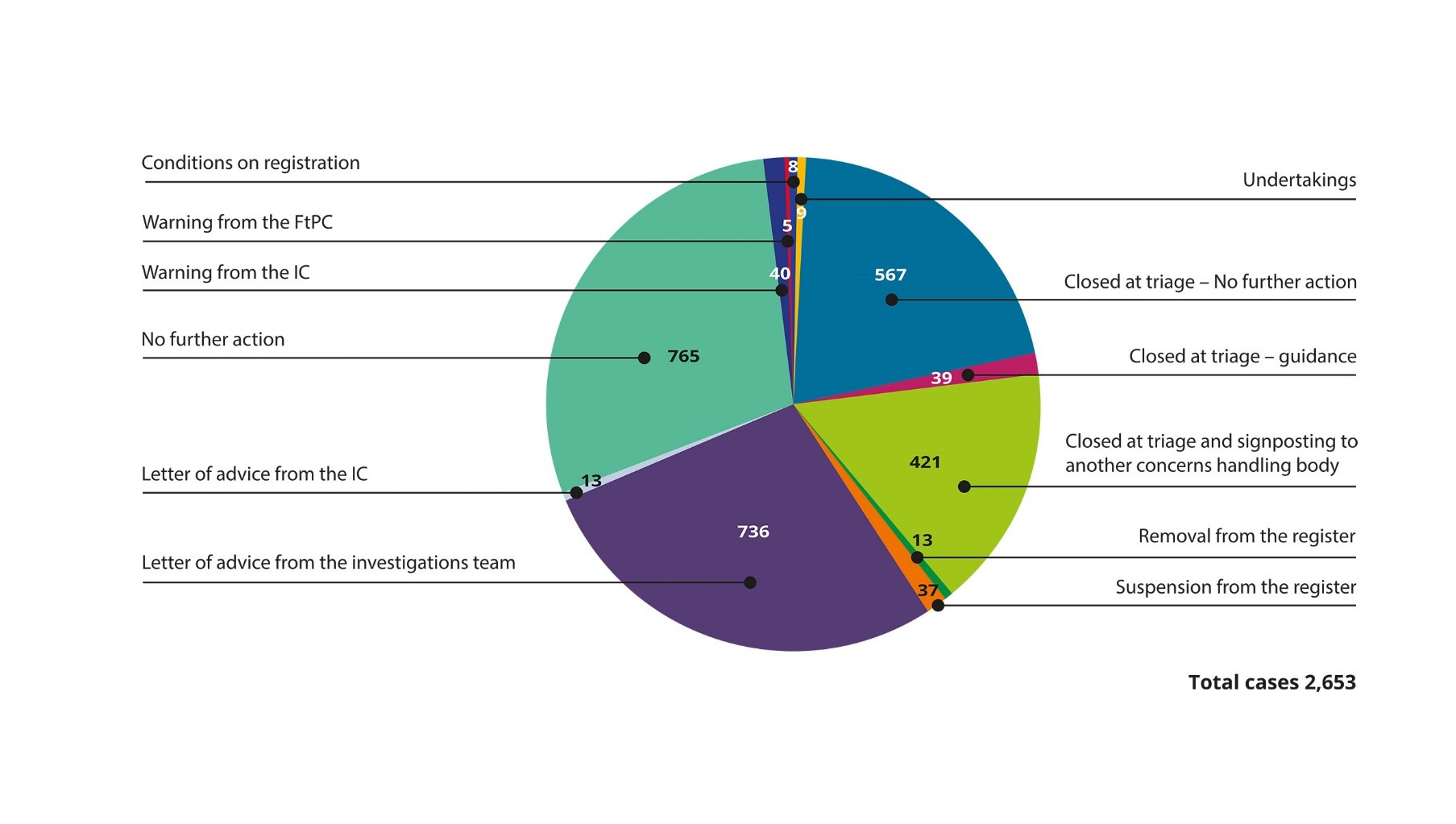 The number of concerns we received

This year the overall number of concerns raised with us increased. In 2018/19 we received 2674 concerns, 345 more than in 2017/18. It is difficult to give reasons for the increase because there are many potential causes. In 2019/20 we will make changes to the case categories we use, to better understand possible links between types of concern and increases in number.

The outcomes of concerns

There has been a notable change in the outcomes of cases over the last year, compared with the previous year. There are likely to be many contributing factors depending on the stage at which a case is closed.

This year, we made changes to how we oversee and report on the earliest stages of considering a concern. The first change was to introduce more senior oversight into this process during the last quarter of 2018/19. This has provided additional assurance that we are taking concerns forward, or closing them, through the most appropriate route.

The second change was to improve how we report outcomes at triage to better demonstrate how often we decide to:

We are currently evaluating the impact of adding more senior oversight into the triage process and we will report on this in 2019/20.

Just before the start of last year, we made a change to how we make decisions during our investigations by introducing revised threshold criteria, which we developed with input from patient-representative and special interest groups. These are the criteria we use to decide whether to refer a case to the investigating committee.

The introduction of the revised criteria appears to have contributed to the increase in the number of cases being closed with guidance from the investigation teams. In 2018/19 we closed 736 cases with guidance following an investigation (45% of all the concerns closed after an investigation). This is compared with 400 cases in 2017/18 (26% of all the concerns closed after being investigated). This is a 19% increase in cases closed without being referred to a committee.
We reviewed how the changes were affecting outcomes soon after we brought them in. Now that we have a full year of data to analyse, we will be carrying out a further evaluation of the impact of our revised threshold criteria on our case outcomes.

We have seen a reduction in the number of removal, suspension and warning outcomes at the investigating and fitness to practise committee stages. However, compared with the overall number of concerns, the reductions are not as significant as they first appear. For example, we closed 13 cases through removal from the register in 2018/19. This is half the number closed with the same outcome in 2017/18 (26 cases).

We have maintained our performance over the last year in progressing cases, with only a slight increase in cases that are over 12 months old. We have done this despite receiving more concerns, and spending more time considering cases at triage through additional senior oversight. At 31 March 2019, 79% of our open cases had been open for less than 12 months, compared to 81% at the same time last year. We continue to progress these cases whenever possible with additional management focus on the older cases. We published new guidance on ‘parallel investigations’ to make sure we take all possible steps to progress cases which are also being investigated by other organisations.

How do I find out about fitness to practise hearings?

Fitness to Practise Committee hearings are usually held in public at our Pharmacy Hearings Centre and members of the public are welcome to attend.

Some Fitness to Practise Committee hearings are held in private if, for example, there are matters involving a registrant’s health.

You can find out about upcoming hearings, and about decisions the fitness to practise committee has made on our website.